The ages 22 to 24 were the two most confusing years of my life.

I graduated from the cocoon of college, into a job I wasn’t sure about.
Attempted to find hobbies so I could have a life outside work.
Then I tried online dating, which was exciting and messy.

In hindsight, those two years were confusing to me because I went from an environment of order (16 years inside the school system) to chaos (“real life”).

I first came across this model of chaos and order in a new book about psychedelics, How to Change Your Mind. Michael Pollan, the author, shares this insight:

Brains function along a spectrum from entropy to rigidity. And on the entropy end, you have serious psychological ailments like schizophrenia.

…On the other end of the spectrum, you get to these illnesses characterized by too much order (like) depression and obsession and addiction.

Since then, I’ve been seeing life through the lens of chaos and order:

Chaos: Spontaneous, last minute decisions.
Order: Every minute of the day planned out.

Chaos: Gambling, investing in volatile assets or starting a new venture
Order: Investing in safe, low-return assets. Holding too much in savings.

I wondered…what benefits might be had by traveling along the spectrum between chaos and order?

In chaos, there is fertility. — Anais Nin

Freedom without structure is its own prison — Me

I once dated someone who vexed me to no end.

I couldn’t count on her to show up on time or make concrete plans.

But I also reveled at the way she danced through life. Striking up conversations with strangers and improvising on the spot.

She was chaos. I was order. 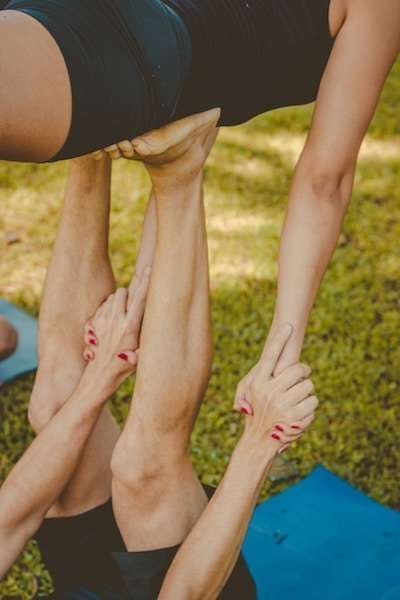 That experience showed me that there are productive and unproductive dimensions to the chaos-order spectrum.

And because I love quadrants to explain phenomena…

To help myself understand where I landed along the spectrum of chaos and order, I plotted it against another spectrum – productive & unproductive expression.

The result was this quadrant: 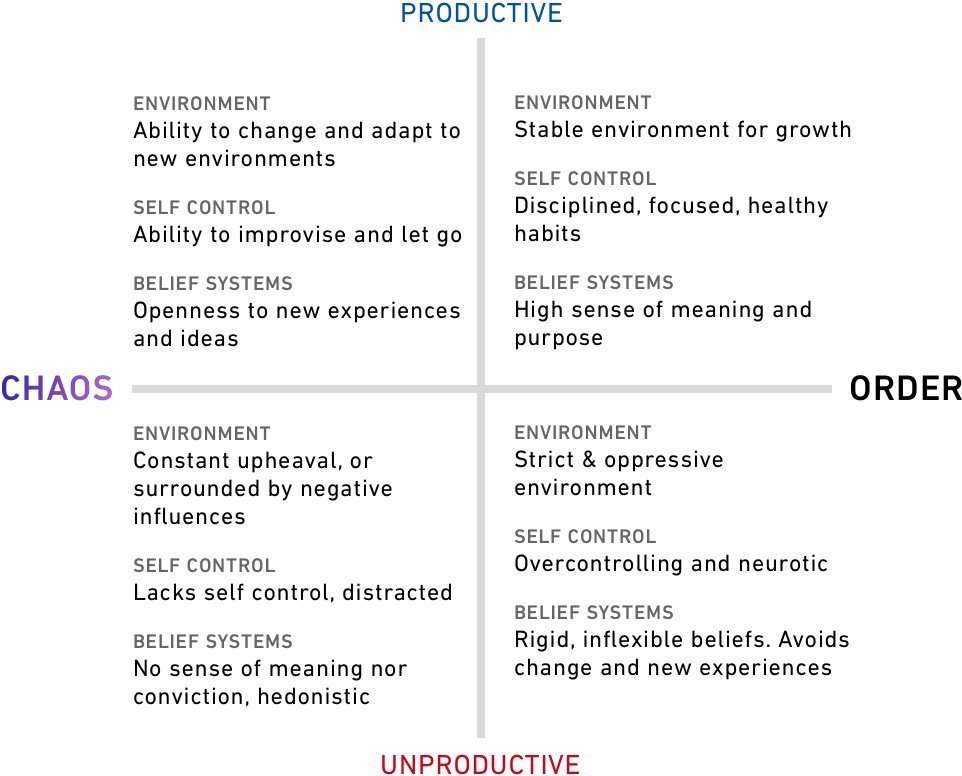 I chose to include the 3 variables of environment, self-control and belief systems to each quadrant because they represent the impact of chaos & order across a variety of situations.


Unproductive chaos is marked by the inability to deal with change. Life feels confusing, messy and difficult. 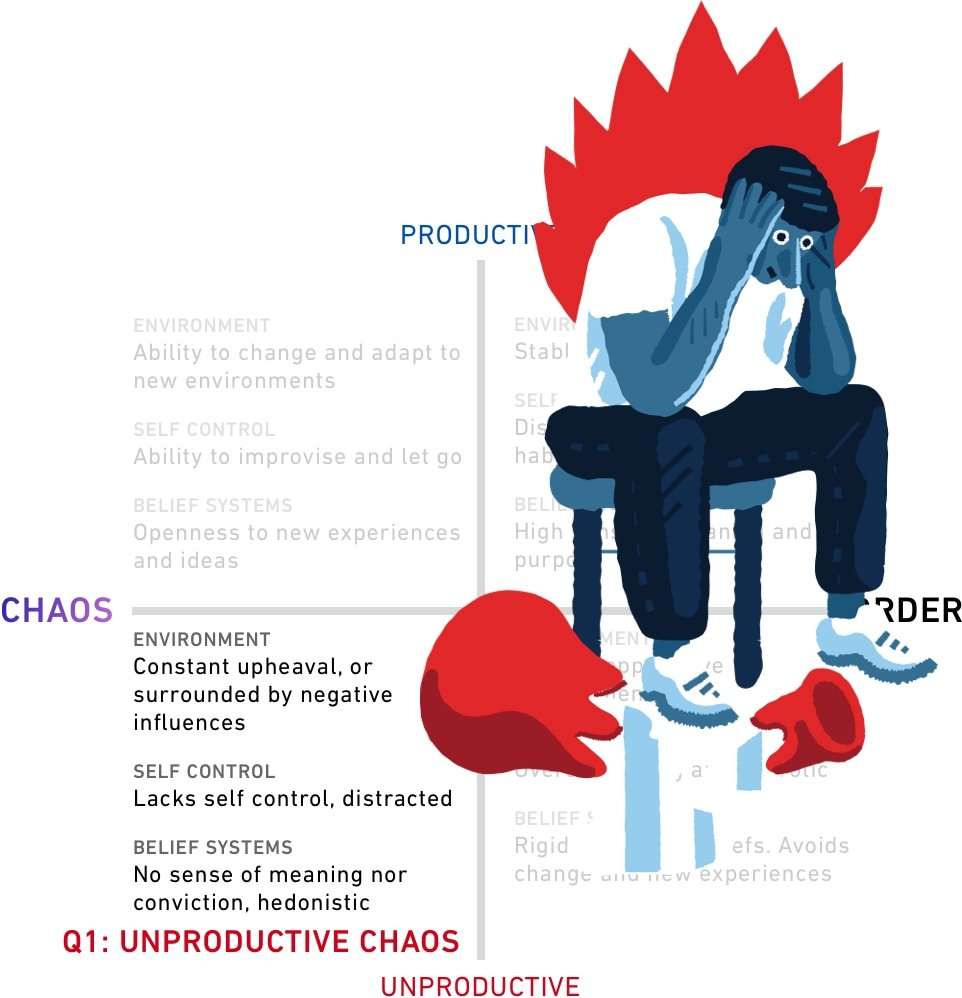 When I was unsure about my first career, I had escapist tendencies (living for the weekends) and fantasized about entrepreneurship instead of taking the responsibility to change careers early on.


Productive chaos is marked by adaptability and openness to change. Life feels fun, dynamic and expressive. 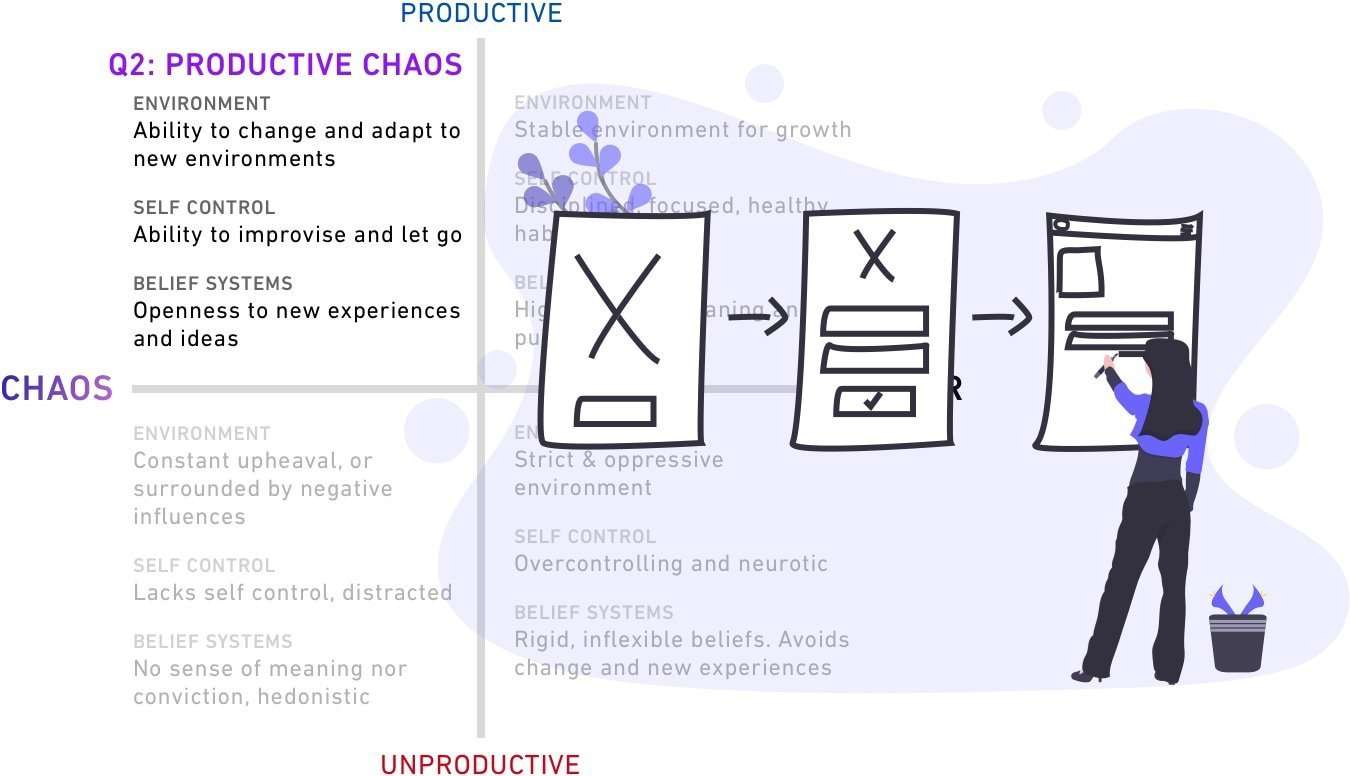 Whenever I was thrown into a new environment, like traveling solo or doing improv, I felt productive chaos.

All those quotes about “going outside one’s comfort zone?” That’s productive chaos. 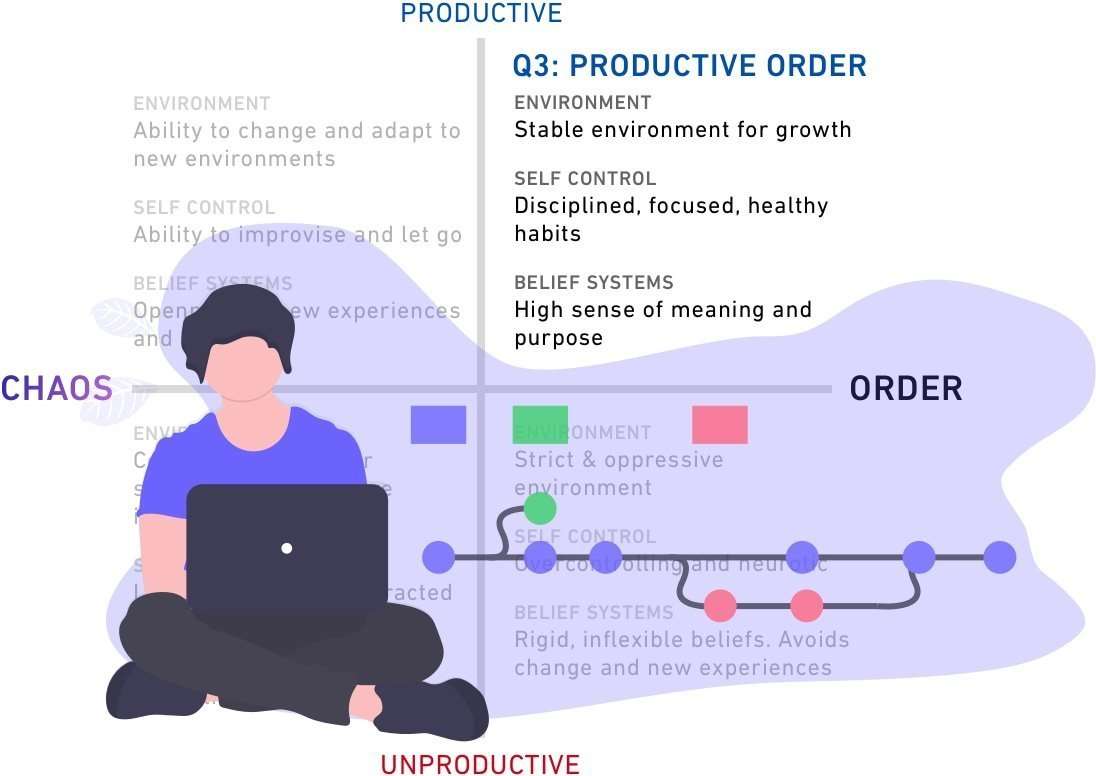 This is the quadrant of healthy obsessions. I experience productive order when I’m self aware, focused, and allow myself to go deep into things I care about.


The most obvious symptom of unproductive order is rigidity. Life feels confined, suffocating and inflexible. 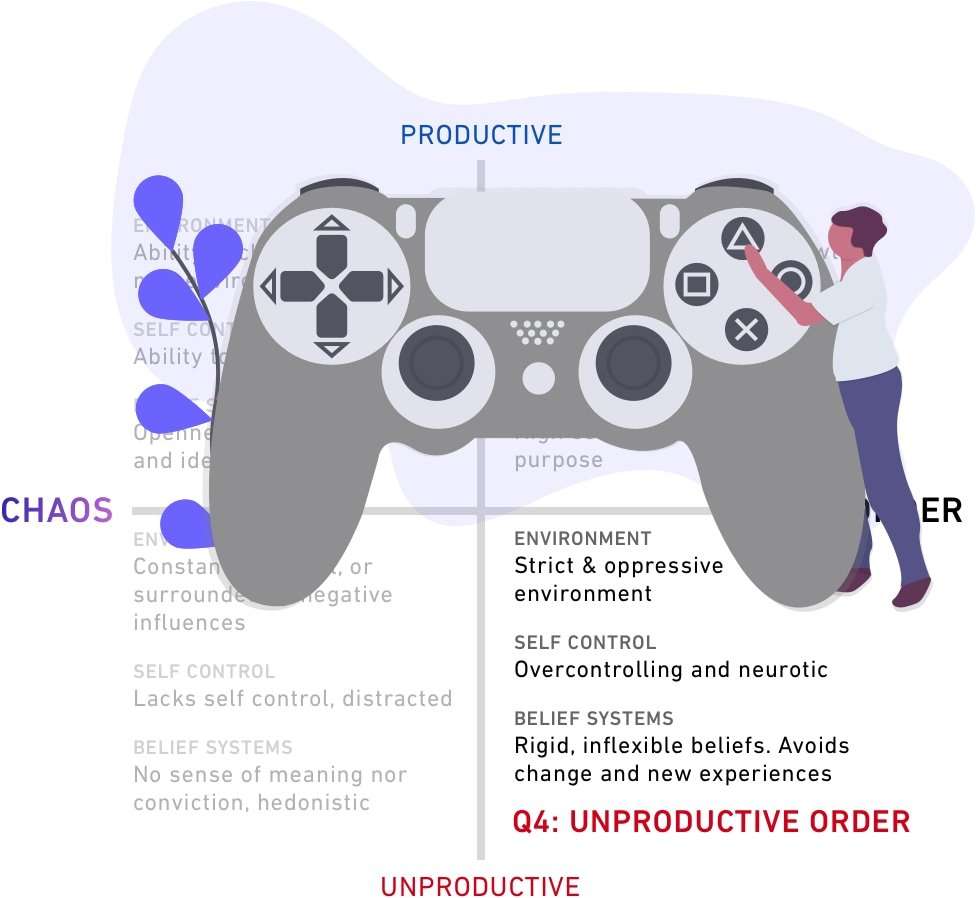 If you feel like you’re too tightly wound up, you probably spend a lot of time in this quadrant.

I know because it’s the one I struggle with most. I’d fall into repetitive routines and not allow myself fun (gotta be productive!). Or, I prevent myself from doing things I want due to perfectionism & over-analyzing.

By identifying areas of my life that sit in the unproductive half of the chaos-order quadrant, I was able to see more clearly how to move into productive quadrants. 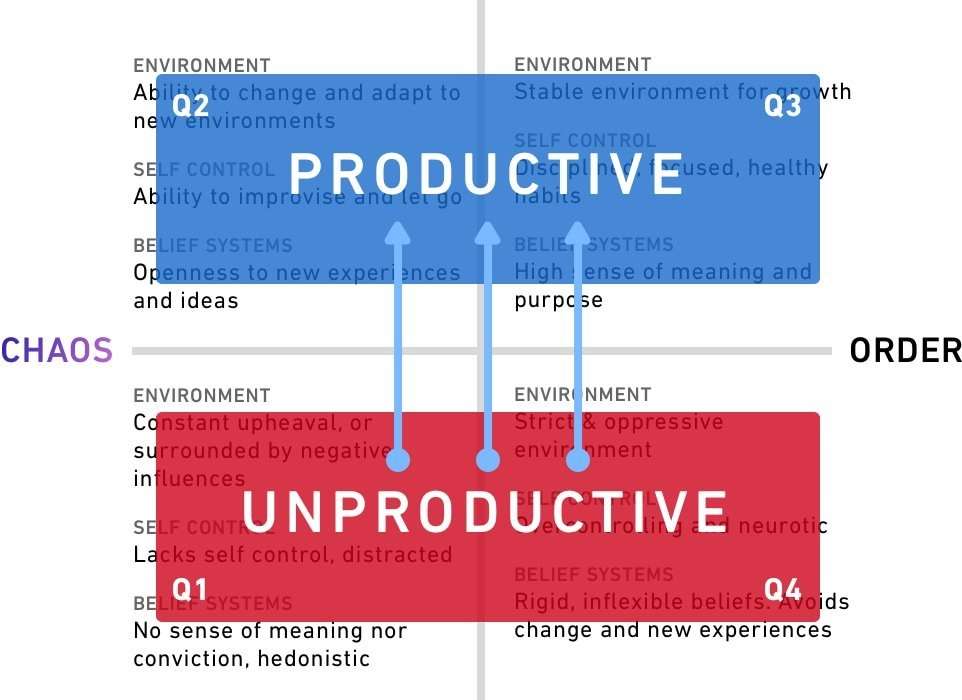 Personal example: I always struggled with waking up early.

My wake-up habit was squarely in Q1 bucket: unproductive chaos. I slept and woke at inconsistent times, and felt tired constantly.

I aspired to be a “morning person” so I tried setting my alarm clock to 5am. 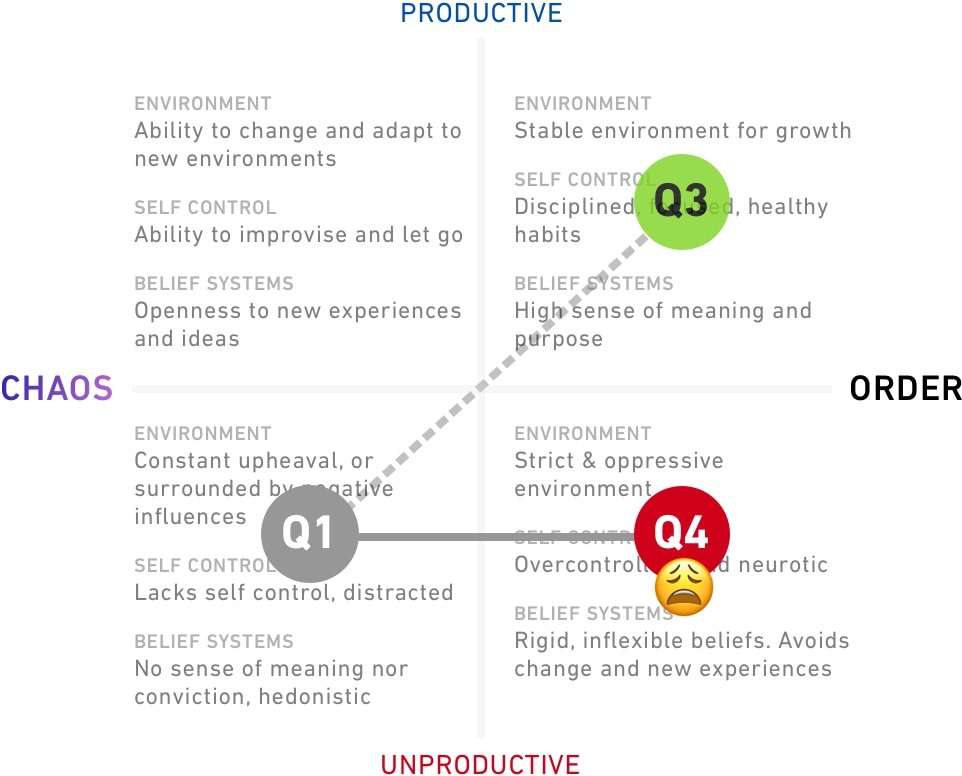 The result? My habit didn’t stick, and I went back to unproductive chaos. 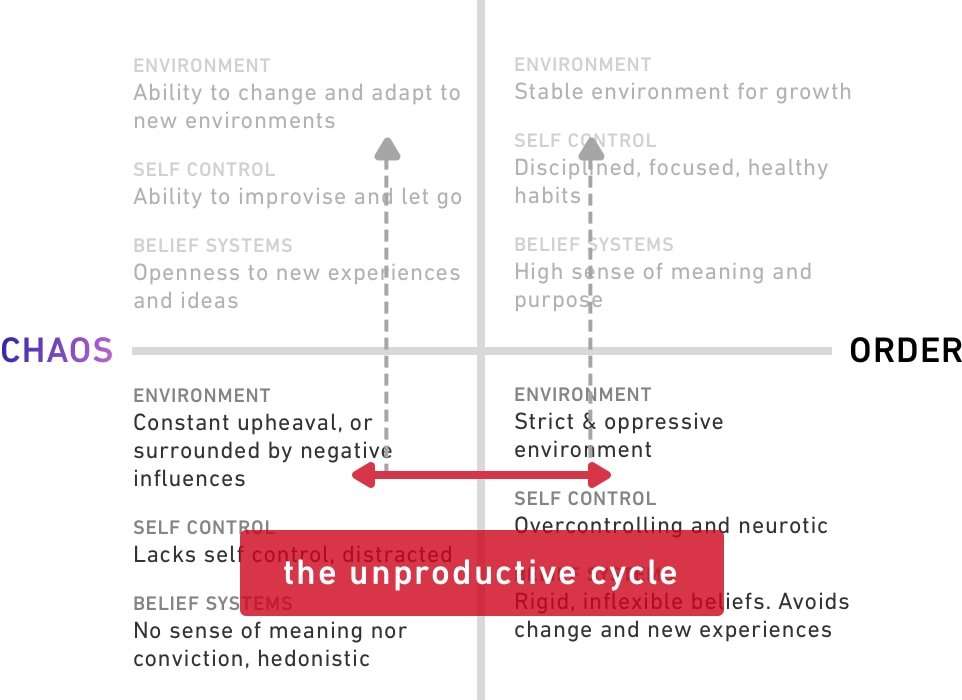 I went through this unproductive cycle enough times with my wake up habit to finally take a step back and try something new until it worked.

She runs out of funds and ends up wondering if it was right to chase her passion (Q1: unproductive chaos), instead of building and testing her ideas in her free time.

A desire to change. Try something new. Fail. Go back to old ways.

I believe this happens because it’s tempting to make big jumps instead of taking small steps.

Just as the human brain remembers things easier in chunks, behavior change is more sustainable with small improvements that accumulate over time.

Dealing with unproductive chaos? Aim for tiny amounts of order to add to your life. Drinking 1 more

Dealing with unproductive order? Schedule small chunks of time to rest, play, and do nothing.

I first got into self help books at the cusp of college. I was 18 and confused about adulthood.

Reading was my way of establishing order to what I perceived as chaos.

This journey helped me become more disciplined and figure out what I wanted to do with my life. (This blog is one artifact of that journey.)

It also added to the subconscious desire to control my experience. This resulted in my tendency to overanalyze and over-plan.

Now I see that whenever I’ve gotten “stuck,” it’s because I was too stuck on one way of being.

Visiting the poles of chaos and order then became my productivity hack.

I’m more naturally prone to order, so I sought new environments that forced me to grow. I did this through solo travel, trying improv, and learning salsa.

When I found myself in a state of unproductive chaos, I quit being a digital nomad and got more accountability in my life.

The best way to construe yourself is not as chaos, not as order. But as the process that mediates between them. — Jordan Petersen

Dipping into one extreme end of the chaos-order spectrum does not mean that one style is better than another.

But it can shed light on how you operate as an individual – and where to go next.

I would love any stories you might have of “changing things up,” whether that’s realizing the need for more order or embracing chaos in your life.